If anybody ever asks me "What's the best thing about living in Southampton?", I invariably struggle for an answer. Is it the fact that the council erected some new energy-saving lampposts in our road a couple of years back that thrills me? Perhaps it's the smoothly tarmacced pavements - no chance of tripping over in the dark when the lampposts have switched themselves off for the night? Or is it the huge array of 99p shops in Shirley?

I really do struggle.

The answer I usually give is "Southampton is handy for the New Forest". A damning indictment of the place I live in, but I can't usually think of anything better.

The New Forest is a charming place. It lies in between two large conurbations, but you can walk for miles in some of the more deserted areas and see very few people. What you will see are woods and boggy heathlands filled with wildlife - there's the famous ponies, but in the Spring and Summer, the place is alive with bird song and butterflies as well.

If I could afford to live there instead of Southampton, I would do.

I've been to football matches in the New Forest three times already this season, and it's always a pleasurable experience - two FA Cup matches during Brockenhurst's remarkable run to the Third Qualifying Round, and then this, my first trip to Sway.

Why did I choose to come to Sway, rather than anywhere else on Saturday? Well, with my photographer's hat on (it's a jaunty, jolly sort of hat with a colourful ribbon tied round the middle), I wanted to go to a pretty ground with a chance of capturing the New Forest in all of its Autumnal splendour. Pre-match, in my mind's eye, I could see the seasonal reds, oranges, yellows, greens and browns producing a kaleidoscopic background of pure natural beauty for my football photos. In reality, the day was overcast and the only bright reds and oranges on show were on the shirts that the players were wearing.

There was also the stand. I'd heard that Sway had a covered stand, but I'd not seen any good photos of it, so I wanted to have a look for myself. Ground enthusiasts like a homemade area of cover - we appreciate the work that's gone into creating a little stand of your own, rather than buying one off the shelf. Sometimes they're rickety, ramshackle scaffolded structures; at other times they're neat, brick built structures that look like they're made to last. Sway have the latter variety. It's really the difference between enjoying a Victoria sponge, slathered in strawberry jam, lovingly handmade by your favourite auntie, and a shop-bought Mr Kipling angel cake. They both do the job, but which is nicer?

I'd had a look at Sway's excellent website before I travelled and read about their history. They were formed in 1908, and the players had to bathe in a pond post-match to get clean and relax their aching muscles. Move over ducks, here come the lads...

The club was banned for a year in 1923 after crowd trouble following one of their matches. When they reformed, a little wooden collection box was made to collect donations. I'd heard that this was still in use today, so I was looking forward to seeing it...and sure enough, towards the end of the first half, a club volunteer came along, holding the original, ninety year old collection box! I was so enamoured with this slice of history that I stuffed a fiver inside it.

We spoke for a little while about the club's present and future. He said that the club rent their ground from the parish council, but they have to pay for the upkeep. They're happy to be playing in the Hampshire Premier League, and that if they had the opportunity in the future, they would consider moving up to the Wessex League, but that finding money for the required ground improvements would be prohibitive. Floodlights may be considered in the future, but their next project will be to extend the clubhouse.

In the meantime, they do the best they can with what they have, and they're perfectly content as they are.

I hope I didn't misquote him there.

With crowds of around 35, there's no problem finding a place to park at Sway's Recreation Ground if you drive there. Alternatively, the village has a train station on the main Bournemouth to Waterloo line a ten minute walk away. You know when you've reached the ground, as the club put a little sandwich board sign up outside the entrance to the car park with the day's fixture written upon it.

The football ground is part of a larger sporting complex which is run by the parish council. To the left of the car park are tennis courts and a children's play area. At the far end of the car park is the clubhouse and changing rooms building, which was erected in 2004 and officially opened by Lawrie McMenemy. There's a cardboard box containing second-hand books for sale in exchange for a charity donation (I was tempted by a Sue Townsend novel), as well as the expected TV set for those who want to know the half-time scores from around the country.

If you trundle out of the clubhouse and walk clockwise around the pitch, the first thing you see is a collection of rollers on your left, safely caged up so they can do no harm. The pitch is surrounded by concrete paving. There are two bottle green breezeblock dugouts on the east side, behind which is a bench seat. Behind the bench are holly and gorse bushes, which obscure the village cricket pitch from view.

At the far end is an extremely tall mesh fence to stop footballs being booted out into the road (it reaches up to what would be Row X or Y at Pompey's Fratton End - it needed to be even taller when one particularly wayward shot got belted into an imaginary Row Z during the first half).

Walk around past the corner flag and up to the halfway line and you come to the little homemade stand, painted in pine green to blend in with the surrounding trees. Four rows of wooden bench seats give enough cover for the entire average crowd on a rainy day. Just beyond the stand is another bench seat, dedicated to a fan who died aged just 45 in 2014.

Sway have just come up from the Bournemouth Hayward League. They lost a few players in the summer who weren't prepared to travel the extra distances involved when playing in the Hampshire Premier League - although the average distance travelled for Sway is only 33 miles for away matches, it could make a difference to anyone who works on a Saturday morning or evening. Thus, with a relatively large turnover of players, Sway have had a slow start to the season as the new teammates gel. They started the day in fifth place in the eleven team league with seven points from seven games.

Four Marks were lying in third place, unbeaten after six games. However, they turned up to Sway's Recreation Ground without eight first choice players - one had phoned in sick on the morning of the match, whereas several others had gone to Royal Ascot for a day's racing. Something Ronald Koeman doesn't have to worry about.

The day got even worse for Four Marks after 32 minutes when they had Kenny-Lee Guinness sent off for an off the ball incident. I didn't see it, as I was pointing my camera towards the player in one of the pictures above who had gone to fetch the ball which had landed in the road behind the ground (just missing a car) after clearing the big mesh fence. An away supporter told me at half-time that there had been handbags from both sides and that the ref had only seen his player's reaction to the initial incident. I suppose the poor old ref can't see everything - he could only adjudicate on what he'd actually seen out of the corner of his eye, so - rightly or wrongly - Four Marks were down to ten men for the last hour.

Sway took the lead a few minutes before half-time, when Dan Fairhurst walloped one in from 30 yards, leaving the away keeper grasping thin air - as good a goal as I'll see all season, whether live or on the telly by a top pro. The home team nearly doubled their lead in stoppage time - the crossbar coming to the away side's rescue.

The team in red fully deserved their half-time lead against their unbeaten opponents. Time for some refreshments in the clubhouse - £1 for freshly brewed tea in a mug and a Kit-Kat. You'd be lucky to have a sip of tap water and a Polo mint at a professional club at that price...

Four Marks improved in the second half. They scored a deserved equaliser from the penalty spot after 70 minutes, Steve Brown confidently dispatching a low shot to the Sway keeper Matt Langdown's right. The match could have gone either way after that, but the deciding goal didn't arrive until the 91st minute. A corner from the right was cleared by the Four Marks defence, but the ball came straight back into the box, where it was headed across the goal by Ben McQuoid. Fairhurst reacted quickly with a scissor kick from five yards which looped up and over the keeper's outstretched arms.

Protests from Four Marks followed the goal - for high feet, I think (wasn't there a similar goal disallowed for Crystal Palace earlier in the season?), but after a quick discussion with the club lino wearing a Man U trackie top, the young referee allowed it to stand, blowing the full-time whistle a minute later.

My next report should be from a Dorset-based Wessex League club on November 7th. Following that, I intend visiting another Wessex League club, but this time in Wiltshire, on November 28th. Beyond that, I had AFC Totton scribbled down as my last pre-Christmas destination on December 12th, but if the weather allows it, I may well rock up at another Hampshire Premier League ground on that day - the 2 o'clock kick-off times are handy for photography at that time of the year - and it will allow me to get to an all-day show at the Joiners an hour earlier than I would otherwise have done...hey, hang on, Southampton has some decent music venues! Perhaps I'll say that the next time I'm asked to justify why I live in the city.

Wherever I go in the Hampshire Premier League in the future, I'm sure I'll end up somewhere pleasant and friendly again.

I'll finish off this week with some bonus shots of the players. No captions, all action... 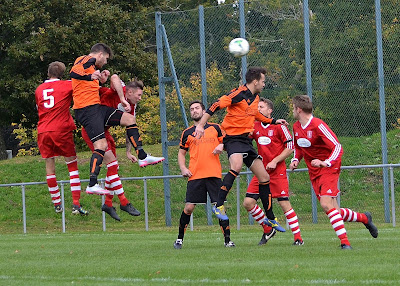 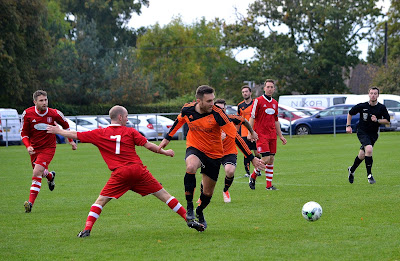 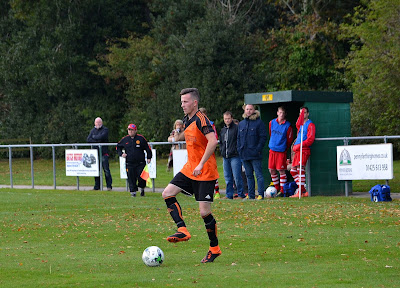 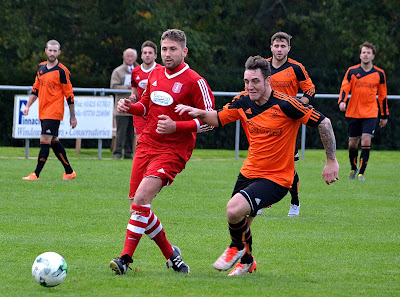 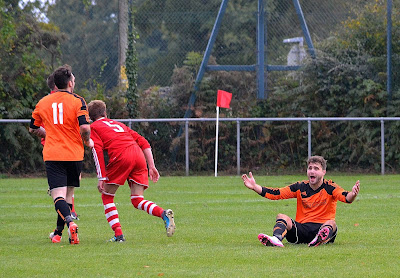 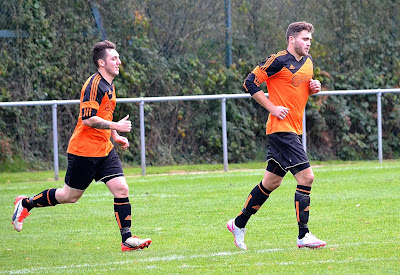 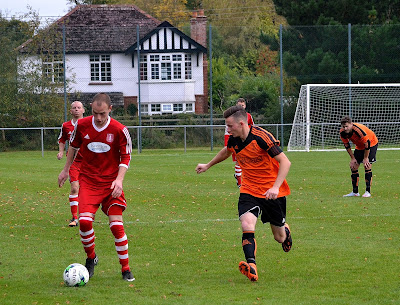 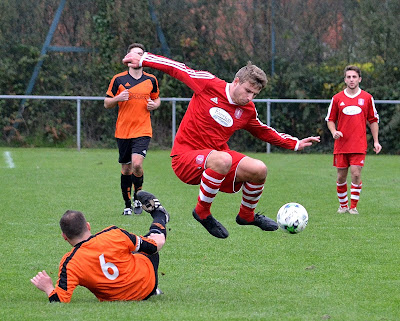